New Wugger in the Richwood Area

I am helping a buddy getting connected in the Richwood area.

His node is DarthVader
https://wind.ctwug.za.net/index.php/nodes?node=16833

Getting started guide read and understood.

Most likely candidate to connect to would be Borg #720??

I have sent an email to Borg Admin asking who the area manager is, or which Test Kit I can book to do the scans. 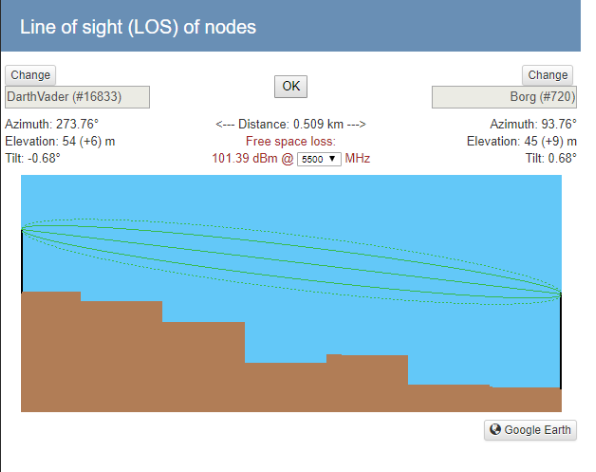 @khelo or @grizzly1 will be able to assist further.

@TheClown book the test kit from Cheaptrick and do a scan. Borg is moving soon so Borg will not be an option for him you can scan for me SSID grizzly1.ctwug.za.net or KMwood my sector is not quite pointing in the right direction but will see if we can make some sort of a plan after scan results.

Thanx Will do as soon as the weather plays along on weekends. looks like rain again this weekend. grrr

Update : Weather and work have not been kind, and this coming weekend is out too due to family commitments.
@grizzly1 we WILL make contact soon to do the scan, bear with us.

Ok the scan has been done. Not looking very good.
We also chose the windiest day of the century, which made life on the roof quite uncomfortable to say the least

Scans to Borg and @Grizzly1 yielded nada. Nothing. The road take a serious dip towards that area, and we were probably scanning way over the top of those nodes, as from DarthVader’s perspective they are in a deep dip.

We did see Euro and Venus , but due to the distance and obstacles, the scans were never better than -75 to -80

I have posted the pictures of the surrounds on WIND. So much of trees!!! and there is a double-storey house right between him and (possibly) Grizzly

At one point we did see KM1 which I assume was @kmwood, but would have to see if that is a possibility.

Did not see these on the scans, but may need to connect either via LuckyLuke or KmWood if the equipment allows. Will at some point have to re-scan there in those directions and re-think.

Some further sniffing, and a possibility

it depends if this antenna (screen centre) is connected. (The Node) Admin = @jasonb)

If it is, it depends if he has a sector facing this way, or an omni.
By far this would be the best connection.

What does the Pink/RED line mean on WIND? Is that a backbone link to Venus?

There is no node with the name “jasonb” on WiND.

Sorry, my post must not have been clear. The Node is Connected. the Node admin is jasonb

Don’t think he is connected. It does not pass on WiND and there are no IP’s allocated. Maybe he wants to link…and it looks like a 2.4 link as well.

Whatsapp me then we can arrange at getting a connection in that direction. as i do not have kit facing that way and nether does grizzly.

If I could ask a favour please.

My friend, David, is the one who wants to join the wug. Unfortunately I
have gotten quite busy, and dont get to that area very often.

Would it be possible for you to help him get connected, or at least test
for a link to you. He can collect the test dish from Cheaptrick, if you can
just help him with pointing your sector and the scanning.

Would really appreciate it.

If you are busy too, I will try and make a plan one weekend soon.

Sorry @Khelo , meant to send this as a PM, but since its here…

I added him to the Richwood whatsapp group so we can chat in there for help.

Thanx @Khelo. Ill leave it in your capable hands then